The 4th of July is a beloved American holiday for people of all ages—and you don’t have to look far to see why!  Between fireworks, togetherness, and all the tasty food, this special summer holiday is truly one of the highlights of the season.

To get your students ready for Independence Day this year, share these fun 4th of July facts with your kids—and then, use our all-new Fourth of July writing ideas to help them reflect on what they’ve learned!

Five Fun 4th of July Facts to Educate and Entertain

4th of July Fact #1 — Fireworks are a long-standing tradition.

The first Independence Day celebration took place in Philadelphia on July 4th, 1777—and it actually looked quite a bit like celebrations of today.  According to The Virginia Gazette, a newspaper of the day:

“The evening was closed with the ringing of bells, and at night there was a grand exhibition of fireworks, which began and concluded with thirteen rockets on the commons, and the city was beautifully illuminated.  Every thing was conducted with the greatest order and decorum, and the fact of joy and gladness was universal.”

Food is a huge part of the Fourth of July—and people eat approximately 150 million hot dogs across the country on this day alone.  What a tasty way to celebrate our freedom!

4th of July Fact #3 —The Liberty Bell was rung on the first Fourth of July—and is still used in celebrations today.

Located in Philadelphia, this historic landmark is a reminder of independence and freedom to Americans everywhere.  It was rung on the first Fourth of July (almost 60 years before it got its iconic crack).  Today, the bell is tapped 13 times each Independence Day in honor of the 13 original colonies.

Fact #4 — Paul Revere and Samuel Adams buried a time capsule on the 20th anniversary of the 4th of July in 1795.

The time capsule was finally opened almost 220 years later in 2014.  It included newspapers from the day, a silver plate, old coins, and a copper medal that featured an engraved picture of President George Washington.

Fact #5– A Supreme Court Justice once tried to create a rival holiday to the Fourth of July.

“Americanization Day” was created by future Justice Louis Brandeis in 1915.  The holiday was intended to celebrate immigrants and America’s melting pot culture at a time when many people wanted to restrict immigration.  However, the holiday sadly never took off.

Did any of these fun 4th of July facts make your students see the country in a new light?  Now, ask kids to reflect on what they’ve learned—and on what it means to be an American—with the all-new Fourth of July writing ideas below!

The following content was first published on this page of my blog on July 3, 2017

Fourth of July Writing Ideas— The Fourth of July is a beloved American holiday – a time when families indulge in fireworks, food, and friendship. As the summer holiday approaches, give children the chance to think about their favorite Fourth of July activities and the significance behind the holiday. 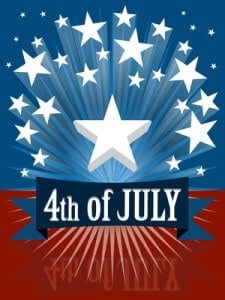 To see the full listing of 53 Fourth of July
writing ideas, click here.

Though a concept like patriotism may initially be a lofty idea to kids, journaling helps them access it from a new direction. Writing on the subject encourages children to understand it in their own ways.

Here’s wishing everyone a very happy and safe Independence Day!

Journal Question of the Day